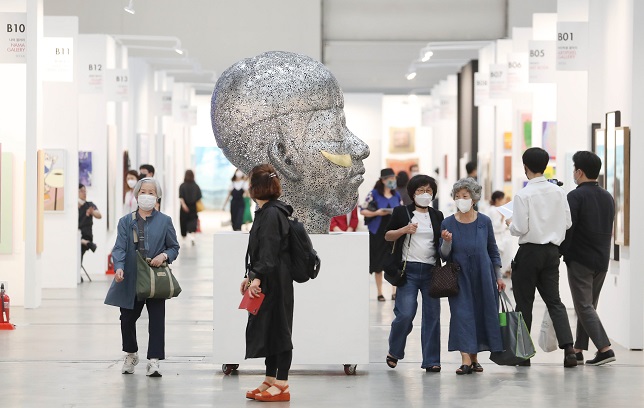 This file photo taken on June 23, 2022 shows people at the Daegu Art Fair 22 in the southeast city of Daegu. (Yonhap)

SEOUL, July 7 (Korea Bizwire) — South Korea’s art market continued its optimism in the first half of this year despite an economic downturn, industry data showed on Thursday.

Total art sales in Korea reached about 532.9 billion won ($410.1 million) in the first six months of 2022, according to data from the Korea Arts Management Service (KAMS).

This is the first time that KAMS has compiled such semi-annual data.

Some 245 billion won in art transactions were reported at local art galleries in the January-June period, while auctions held by the country’s top 10 auction houses brought in a total of 145 billion won.

The so-called art portfolio investment, referring to a new type of artistic investment in small shares of iconic works of art, is estimated at 31 billion won in the first six months of this year.

The local art market has been booming since last year thanks to growing demand for artwork from individual investors amid the prolonged pandemic.

KAMS said the annual amount is expected to reach 1 trillion won for 2022 for the first time ever, as the Korea International Art Fair, the country’s largest art event, is set to be held in September in partnership with Frieze Seoul, a prestigious international Contemporary Art Fair by the art platform Frieze.