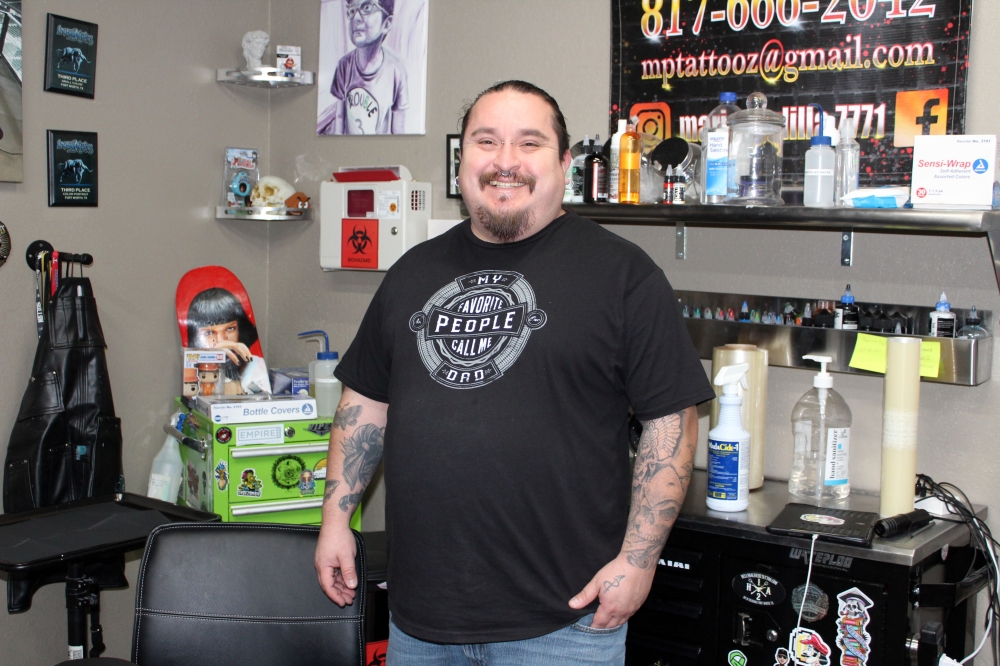 Mario Padilla learned to become a tattoo artist while serving a prison sentence. When he launched his own studio in May 2021, he did so for the flexibility to work around his elementary-aged son’s schedule. (Karen Chaney/Community Impact Journal)

Mario Padilla was 17 and working in the oil fields when he got his first tattoo.

“I got my last name and ended up covering it up – it was very ugly,” the Roanoke resident said.

Years later, while serving a prison sentence for a drug charge, Padilla said he decided to take oil painting lessons. After seeing his artistic talents, his cellmate asked him to touch up an existing tattoo.

“I said I would start tattooing [prison] because I kind of knew how to do it,” Padilla said.

Padilla’s friend, also a prisoner, was an experienced tattoo artist and taught Padilla the do’s and don’ts of the industry. Once Padilla got out of prison, he said he immediately found work as a tattoo artist. He said he also went to tattoo shows and practiced to improve his artistic skills. He recently worked at a studio in Keller.

On May 5, 2021, Padilla opened Saint Cecilia’s Art Studio in Roanoke. He said he wanted to run his own business so he could fit in with his son’s school schedule. Padilla said that due to its opening hours, its clientele consists mainly of footballing mums and dads, the military and young people. He said he was responding to multiple requests to conceal names of past relationships.

Just because someone is 18, the legal age to get a tattoo, doesn’t mean Padilla will give them one. He said he gets into “dad mode” when young people come in asking for something he thinks they might regret.

“Young girl wanted gangster lettering – big, something you would see on an older guy. I told him I wouldn’t,” the business owner said.

One customer liked the album cover and had tattoos showing her musical affinity, Padilla said. After the client died, his parents came from Weatherford, Texas and asked Padilla to duplicate their son’s tattoos on them.

“They were older people, who had never had tattoos before, and they were getting sleeves [as a] memorial to their son,” Padilla said.

Padilla said many of his customers are repeat customers.

“My clients are not just my clients. They’re kind of like my family,” Padilla said of why he has such a high percentage of loyal customers. “They believe you’re going to do a good job with them.”