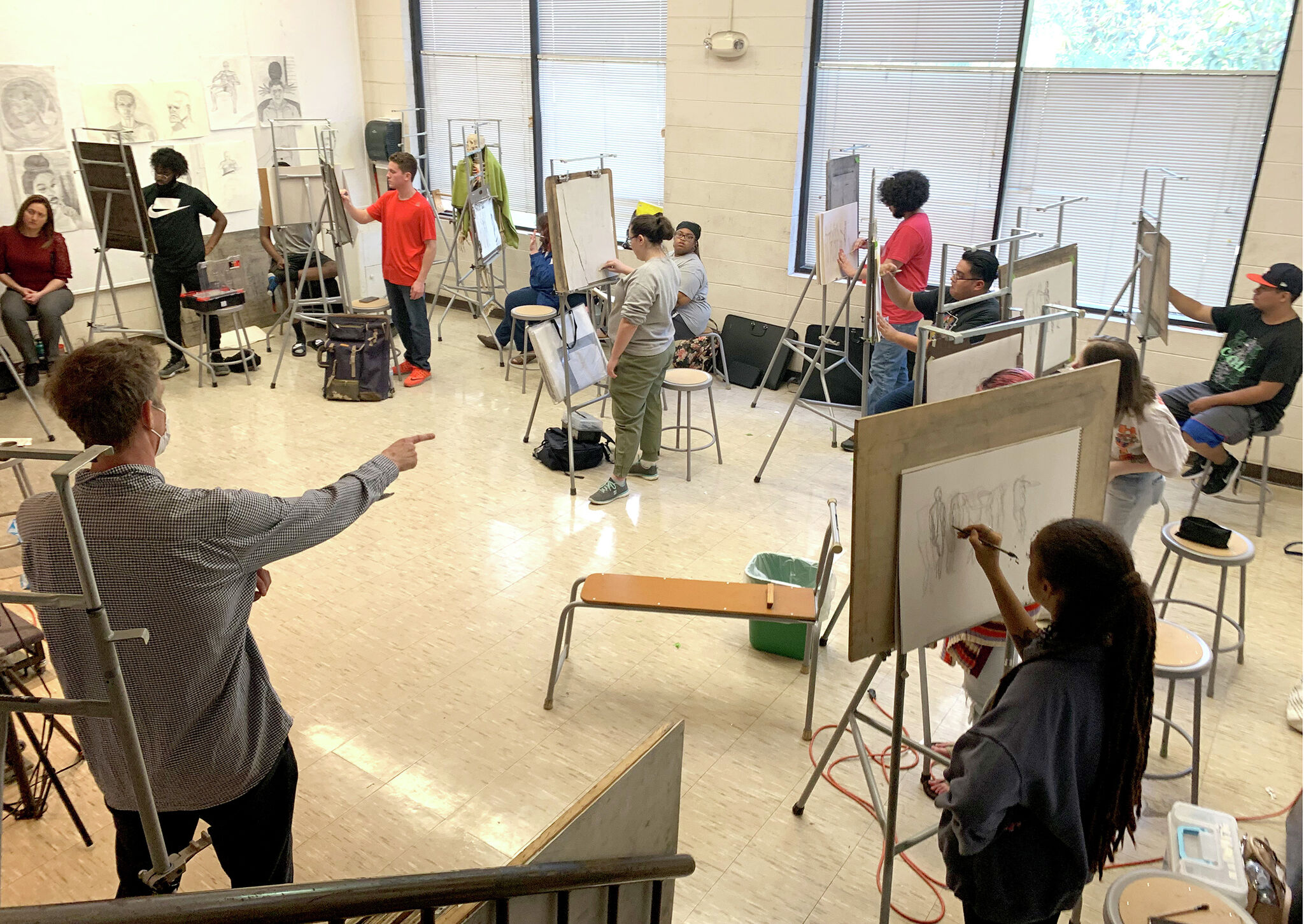 We’re all used to the feel of pencil on paper, the way graphite has a slight streak when the paper nap adds tension. It’s the drawing. Where is it?

Once upon a time, all painting was done in tempura – a pigment mixed with egg white. Then oil paints became the preferred medium before acrylic paints took over. Will digital drawing become the dominant medium for painting and drawing of the future? Well, the jury is still out on what is still nascent technology, but that’s not stopping Lamar art teacher Christopher Troutman from testing the medium’s limits.

“The Digital Drawing Exhibit by Students Christopher Troutman and Lamar,” on view at The Art Studio, Inc. from November 5, offers a glimpse into the future. The exhibition will feature a selection of works by Troutman and 15 current and former students from the past three years.

“That’s the point of the exhibit, just trying to understand and learn how to use these materials, so that I can incorporate them into the classroom and create the opportunity for students to use them, which I had feedback,” he said.

Alex Williams, a junior art student at Orange, said she has dabbled in digital drawing, but not as much as traditional analog drawing, which she says is her “bread and butter” and where she works the better.

“For the most part, I feel like there are easier things to do than traditional things. If you make a mistake, you can always hit undo or just swipe the brush and away you go. But the rendering process is really different.

With traditional drawing, Williams said, the artist can feel how they’re making their mark, but digitally it’s different.

Art student Kenzie Marriott said she realized in seventh grade that she was good at drawing and that it was a career she wanted to pursue. She said she was happy with the way her drawings came out.

“(The) initial success is how everyone gets into their field,” she said. “If you’re good at something, you want to do more of it, and the quality of my digital drawing really got me excited to pursue digital.”

Williams said she likes to scan a drawing and then manipulate that image digitally on the tablet.

“We’re discussing whether if you do something digitally, it’s kind of like cheating,” she said. “But you have to know what you’re doing, like before.”

Troutman, who has exhibited extensively and is a master draughtsman, has experimented with digital technology in his work, sometimes working exclusively digitally, but also often adding to printed images, creating a hybrid of manual and digital creation. He said it makes him feel more connected to the artwork than if it was just created digitally.

“Physically it feels different, the roughness of the pencil on the fibers (as opposed to) the different nib on the drawing tablet,” he said. “It looks like it should be easier than it is.”

Troutman said the tablets try to be more natural, even replicating the feel of paper with screen covers, but that doesn’t give him the satisfaction of drawing on paper.

“If I know it’s going to be something like a comic book, or something that I know is supposed to be mass-produced, then it’s like, OK,” he said, “But if these are great designs, I can’t do the same.”

“I always go back to my roots,” she said. “That’s where I find my strengths.”

Marriott said traditional drawing and painting will endure because of the personal connection to physical drawings.

“I think it will always be because it’s been there forever,” she said. “Everyone always felt the paper, the materials, we continued with. (but) digital is definitely a new way to go. It’s another facet.

Troutman said he hopes the exhibit will show people that Lamar’s students are doing great work.

“Their interests drive innovation in our program,” he said.

“Digital Drawing Exhibit by Students Christopher Troutman and Lamar” opens with a reception, 7-10 p.m., November 5, and will be on display through November 22. The Art Studio, Inc. is located at 720 Franklin St. in Beaumont. For more information, visit www.artstudio.org.