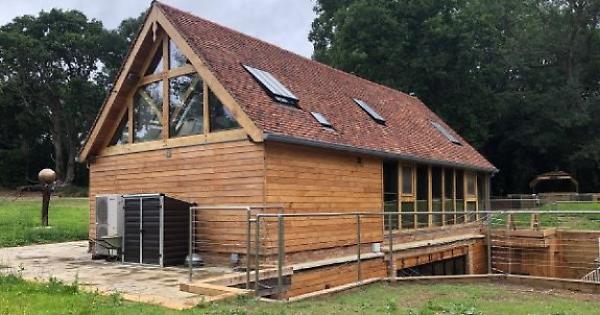 A planning authority acted “unreasonably” in ordering the demolition of an art studio which was illegally built in the countryside, a planning inquiry has heard.

Clive Hemsley, of Hart Street, Henley, is appealing against a demolition order for the studio apartment he built in Rotherfield Greys.

He argues that the three-storey building on his land is not much bigger than the one he had previously proposed and was approved by South Oxfordshire District Council in 2017.

The council says the building is “materially different” from what was approved and is taller and in a different position. He is also concerned that the “private studio” could be used for art lessons, a gallery or residential accommodation.

The inquest heard on Wednesday that when Mr Hemsley asked the council for advice during the construction of the studio, his calls and emails went unanswered.

He said: ‘Council has not responded and has not provided answers. The plaintiff sought advice during the construction process and received none. It was very frustrating for the applicant that there was no real dialogue between the parties.

“The art studio was built to the highest possible standards and to say it was not designed properly is totally untrue. The studio is no more visible than the approved design and the effect is not is no bigger.

“The building was designed as an art studio. I’ve been there several times and I don’t see why anyone would make a home of it.

Mr Munnings stressed that while the stables at the site served as accommodation for Mr Hemsley’s son, the possibility of an art school with regular classes and dozens of people visiting the site each day was “never the intention”.

Juan Lopez, for counsel, said Mr Munnings was “repackaging something to reframe a complaint” and that the discussion of residential use of the site in the past was “irrelevant” to the appeal.

In November, Mr Hemsley told the inquest he intended to use the studio to teach terminally ill people, but if the council did not allow the teaching facilities he would use it. would accept.

Plans for the artist’s studio date back to 2016 when he asked permission to convert an existing stable and he said it would be for his use only. Over the next two years he made applications to demolish the stable and replace it with a purpose built studio with a footprint of 77m², comprising a gross floor area of ​​100m² and a basement of 24m². These were approved by the board.

But the current building has a footprint of 102 m² with 237 m² of floor space over three floors, including a larger-than-expected porch.

Mr. Hemsley had consent for a small private facility despite opposition from neighbors and parish councillors.

Opponents said it would not fit the rural environment and would have an ‘urbanising’ effect on the Chilterns Area of ​​Outstanding Natural Beauty.

The National Trust, which owns the land used to access the site, also objected.

After the studio was completed, an execution inquiry was launched by the council. He then refused a retrospective request and ordered the demolition of the building. Mr. Hemsley therefore appealed.

The inquest was due to end today (Friday).