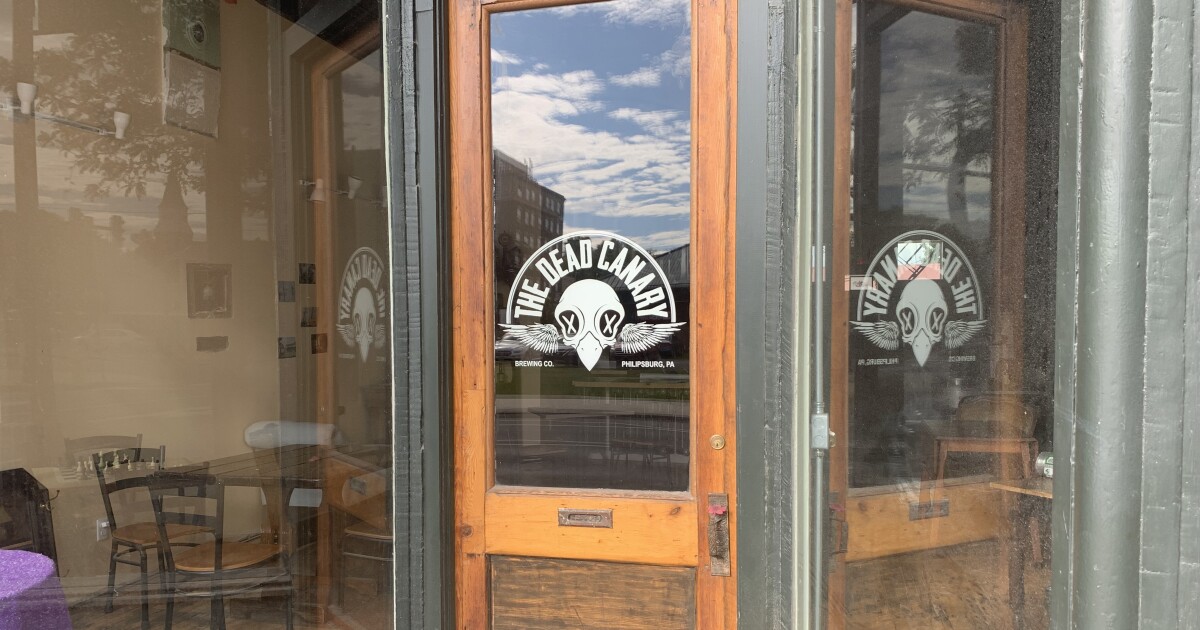 Brent Baskin, 29, sits at an old wooden table in a brick building on Front Street that he helped renovate. The patched parquet floors, tin ceilings and chandeliers remain. They added a bar, silver beer tanks and a mix of antique furniture.

“I can’t even describe how I’m going to feel when I see people sitting here and enjoying beer.”

He sits at The Dead Canary Brewing Co., a brewery that Baskin and his business partner Eric Kelmenson are set to open in late summer.

Residents of Philipsburg, a town on the western edge of Center County, are excited about the upcoming opening of two new downtown businesses: The Dead Canary and ARTery. There is hope that these companies could signal a new era for Philipsburg.

Baskin has no roots in the region, but the project was introduced to him a few years ago by Kelmenson. At the time, Kelmenson was president of the Philipsburg Revitalization Corporation, a group that aims to organize events, attract businesses and maintain older properties in Philipsburg, all to help attract new visitors and grow its economy.

Baskin said Kelmenson is heavily involved in the city and owns several properties there.

“[Kelmenson] has a big interest in bringing Philipsburg to a place where people are really excited about it,” Baskin said.

Eric Rusnak is the current president of the PRC. He said The Dead Canary and other incoming companies are an exciting time.

“We have a group of people here who are really motivated to improve the city,” Rusnak said. “I think the city is at a turning point. We’re going to see a lot of progress this summer, and that’s exciting.

Rusnak said The Dead Canary and an art studio named ARTery are moving in and revamping older buildings on Front Street that had been empty for years. He has high hopes for what they can do for Philipsburg.

“What we hope is that these companies will attract other companies to come in,” Rusnak said. “And we hope to reach a critical mass where people will find a number of things to do in downtown Philipsburg.”

The Dead Canary will be Philipsburg’s first brewery since 1941. Baskin said the name is a nod to Philipsburg’s coal mining history, when birds were used to warn miners of gas leaks . He said the name also recalls a time when coal and timber mining supported the city’s economy.

“We’re trying to bring Philipsburg back a bit,” Baskin said. “He had his peak and he had a slight decline, but we really want to try and revive him.”

Baskin said the brewery will open with six taps, offering house-brewed cream beer, IPAs and potentially smoky or sour beers. Baskin said he would be content to be a mainstay in town.

“Our goal is just to have a cool community space,” he said. “We’re not trying to explode here and be the next big craft brewery, we really just want a space that people in Philipsburg can come out to have a drink, be excited to take their friends.

Baskin brings eight years of home brewing experience to the company. He admitted to being nervous throughout the process of The Dead Canary, but said he was confident it could pull off.

“We’re super, super excited for people to come out,” he said.

A few doors down from Front Street, ARTery is another company coming to Philipsburg. It is directed by the artist duo Lynn Anne Verbeck and Adrienne Waterston. Waterston said it would be a communal space for creating art, with a small cafe attached. Like Baskin, she envisions a relaxed community space.

“We hope to have a space where people feel comfortable coming in and out,” Waterston said. “We imagine acoustic music and poetry slams, and we would like to have lessons and subscriptions.”

ARTery will focus on Waterston and Verbeck’s background: screen printing and pottery.

Philipsburg is the home of Verbeck; she grew up here and returned after graduating from the State University of New York at New Paltz.

Waterston said there are a lot of things she loves about the city in its current state, in addition to its affordability compared to State College, where she lives.

“I love old towns,” Waterston said. “And the energy that permeates the town, you can tell CRP has really tried to help make it a welcoming place for people, and it’s in a beautiful setting.”

Both companies are different from most previous companies in Philipsburg. But Rusnak hopes they’re just what downtown Philipsburg needs to thrive again.

“Front Street started to look like a ghost town,” Rusnak said. “And we have all these beautiful buildings, some of them are architecturally significant, so our hope is to find new businesses that fit well in Philipsburg and bring back a sense of community.”

In addition to The Dead Canary and ARTery, Rusnak said the area will soon also feature a tourist heritage center and an archery shop. Average Jack Archery already has a YouTube channel with over 45,000 subscribers.