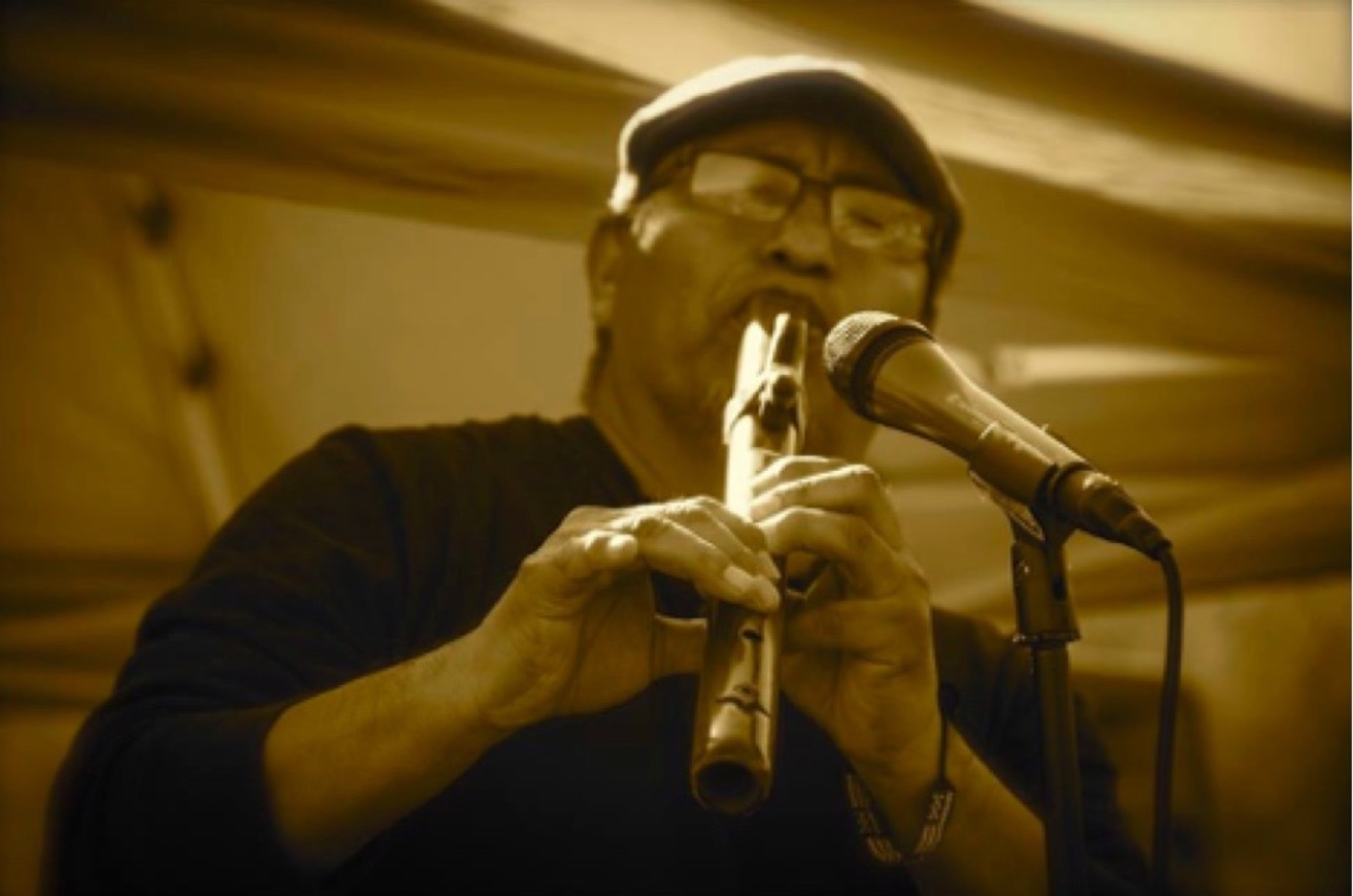 TULSA, Oklahoma – If you can name any art medium, chances are Randy Kemp produced work in that format. Kemp is a multidisciplinary artist and has produced works in painting, printmaking, installation, music, film and performance. Some of these works were exhibited at the first Mvskoke Art Market on April 23-24.

Kemp lives in Phoenix, Arizona with his wife Beverly, son Raven and daughter Rykelle. His children are also artists and appeared at the Mvskoke art market alongside their father.

Kemp is a citizen of the Muscogee (Creek) Nation, as well as a member of the Choctaw and Euchee Tribal Nations. He resides as a senior environmental graphic designer at Arizona State University.

Originally from East Los Angeles, Kemp grew up in Bell Garden. Kemp discovered his passion for art at an early age.

“I attribute this to my brother, who was drawing pictures on the back wall of our house, I would walk in and do reflections and shadows. said Kemp. “It was kind of like tuition without tuition.”

Although Kemp enjoyed drawing throughout his childhood, the idea of ​​a career in art did not cross his mind until high school. He would later earn an Associate of Art degree from Bacone College and a Bachelor of Fine Arts degree from Arizona State University.

“I really enjoyed it because it gave me autonomy, it really helped me to understand where I fit in society as an artist and the points of view that you take and paint” , did he declare.

The tools available at Arizona State allowed Kemp to expand his talents in graphic design and computer arts, leading to a 30-year career as a commercial artist.

Although his talent can be seen in many different mediums, Kemp’s favorite work is acrylic paint due to its versatility and speed.

He is also a musician and plays the flute at various art markets and festivals across the country.

Like other artists working during the COVID-19 pandemic, Kemp has had to readjust his approach to exhibiting his works.

“We had to grow a new leaf,” Kemp said. “It meant we had to do a lot of online presentations, we had to fill out a lot of online shows. Having to work with other artists was difficult, you have to do more on computers, programs, send files in two meanings. It was a different reality, that’s for sure”.

Big events like the Mvskoke Art Market have begun to symbolize a turning point for Muscogee (Creek) artists looking to exhibit their work and fellowship with other artists.

“It really is an important show,” Kemp said. “It’s important that the Muscogee people and artists are recognized as part of the show.”

Not only did Kemp exhibit his artwork at the event, but he also served as an art competition judge. He said the Mvskoke Art Market is significant because it provided Muscogee citizens and artists with an opportunity to participate in an event comparable to any other major Aboriginal art market in the country.

When asked what his proudest accomplishment as an Indigenous artist was, he firmly replied that it was raising his children. Her son Raven is currently studying art and technology at the Chicago Art Institute, and her daughter Rykelle is a goldsmith who makes jewelry for her small business. Kemp had the pleasure of exhibiting alongside her children at Mvskoke Art Market.

Asked about his thoughts on Indigenous media today, Kemp said that with the creation of Reservation Dogs, it’s a good indicator that “we’re headed in the right direction.”

The show was important to him because it provided Indigenous artists with theater and film opportunities that were unavailable when he was younger.

Kemp’s talents provided him with opportunities to serve in Native American art markets across the country, including New Mexico, California, Oklahoma and Arizona.