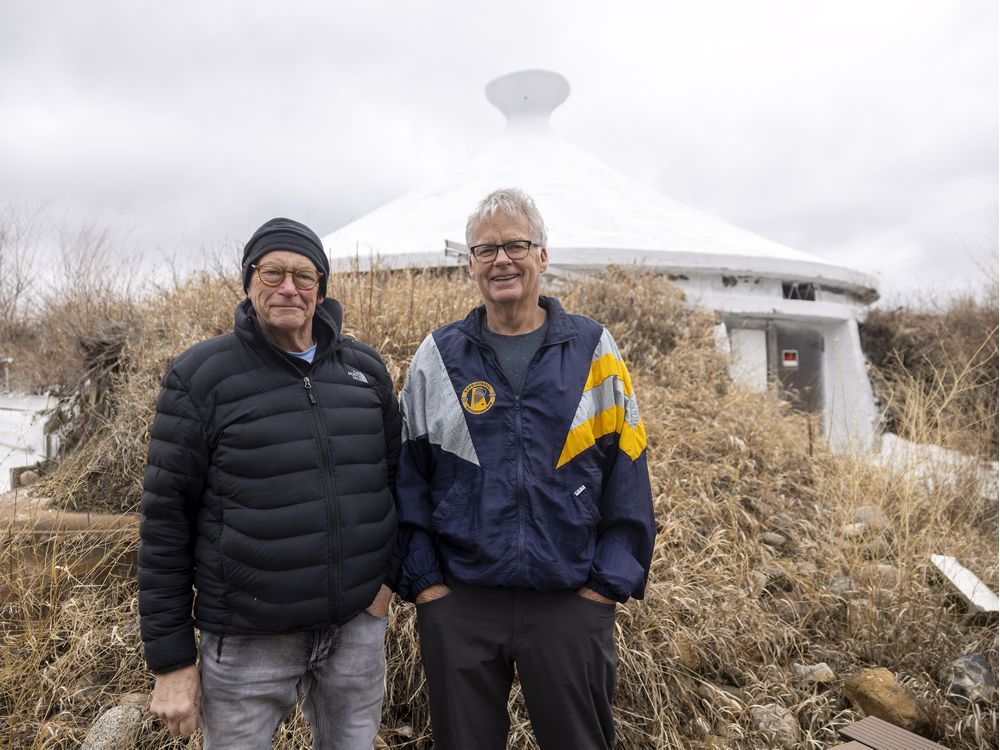 At the time, John Nugent’s art studio smelled great as hundreds of gallons of beeswax were poured and turned into ornate candles for most Catholic churches in Western Canada, as well as for private clients in the province.

Now it smells a bit earthy.

The unique studio, decorated with a crisp white conical roof, blends into the snow-capped hills of the Qu’Appelle Valley during the winter months and stands out during the hottest days of the year. Much of the studio is underground, built on a hill with a series of concrete culverts used as windows along the base of the building, looking out over Lumsden.

The studio, designed by famed architect Clifford Wiens, is the birthplace of two statues of some notoriety by Nugent – one of Canada’s first Prime Minister John A. Macdonald, the other of Métis patriot Louis Riel .

Inside the main studio dome, part of the roof – which contains asbestos – is cracked. The floor is full of items placed there for storage but it is clear that repairs are needed. The roof was built over five weekends, as Nugent and Weins spent their free time fabricating and building the studio in 1960. It’s a modern design, which shares a lot in common with Wien’s other design work. .

Around the building there are sculptures made by Nugent, but the local deer are the most frequent visitors.

Art by Nugent, Wiens, Ted Godwin and several other Saskatchewan artists will be up for sale at two auctions on May 7, with all proceeds going towards restoring the studio.

The auctions, one silent and one loud, will take place May 7 at 7 p.m. at Lumsden Centennial Hall. There are 20 pieces available in the auction and over 60 for the silent auction.

The studio sat unused for nearly two decades, despite its history and despite its connection to Saskatchewan art and culture.

“Well, John got older, he was born in 1920,” said Rand Teed, who worked at the studio as a teenager, helping Nugent in his artist endeavors and learning the art of candle making and of bronze statues. Nugent died in 2014.

“The last 20 years or so, he wasn’t really able to do a lot of work, and so (the studio) kind of sat down and deteriorated a bit,” Teed said.

On Saturday morning, while rummaging through some of the items left in the workshop, he found one of these old candles. When asked if it was one he could have made, Teed said no, all of his candles had long since been burned out.

Inside the studio, a large metal beam juts out through the space, suspended from the ceiling. Teed explained that there was once a furnace in the studio that was hot enough to melt bronze, and using the beam, the molten metal could be poured into molds, making statues.

Nugent also made crucifixes, crosses and chalices for Catholic churches in Canada.

While the artistic pedigree of Nugent and the studio has long been known, enthusiasts now want to restore the studio and hand it over to the town of Lumsden.

Teed remembers the studio as a hub of creative activity and culture.

It was there that he first heard Bob Dylan, a place where artists and critics from all over the world gathered, and Teed hopes to see that kind of life and energy again at the site one day.

“When it was really active here, there were a lot of artists from around town coming to visit,” Teed said, adding that once even art critic Clement Greenberg came to the studio.

Cheryl Robinson and her husband Bruce live near the studio in Lumsden and are part of the restoration effort.

“Last year we patched up… all the cement work and had it repainted because it was starting to look pretty darn shabby,” she said.

The interior must be patched and leveling along the building is also necessary. The site is provincial heritage property and work has been done on the 2.7-hectare parcel of land it sits on, but funding for repairs is insufficient, Robinson said.

Teed, the Robinsons, and Nugent’s daughter, Karen, all want to see the studio return to its former glory and create a new community space.

News seems to be flying towards us faster all the time. From COVID-19 updates to politics and crime and everything in between, it can be hard to keep up. With this in mind, the Regina Leader-Post has created a Afternoon titles newsletter that can be sent to your inbox daily to ensure you are up to date with the most vital news of the day. Click here to subscribe.

Sign up to receive daily news from Regina Leader-Post, a division of Postmedia Network Inc.

Thank you for your registration!

A welcome email is on its way. If you don’t see it, please check your spam folder.

The next issue of Regina Leader Post Headline News will soon be in your inbox.

We encountered a problem during your registration. Try Again